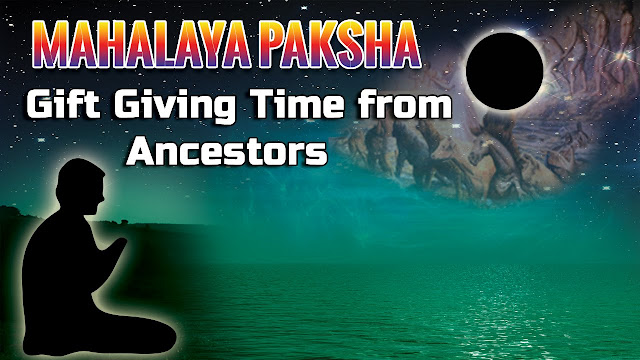 Mahalaya Paksha  orPithru Paksha  orApara  Pakshna  is the 16 days of waning moon starting from Prathama after full moon  to  the  Mahalaya  Amavasya  .It normally comes in the  month of Kanni  or  Purattasi (September-october)   or Bhadrapada
There is a story   behind  the choice  of this period in North India  . It seems  Karna   went to heaven  and he was given only gold, diamonds, jewels etc but no food. When Karna  asked they told him  , that  though he  gave  lot of charities  of wealth , he never gave  any food to his ancestors.  When Karna pointed out  that  he did not know who were his ancestors, they allowed  him to go back to earth for 15 days and  give food to his ancestors during that time.This period is considered  as  Mahalaya  Paksha.
In South India we believe  that  , becoming happy with all  the Pithrus in Pithru Loka   Yama Dharma  Raja sends all the pithrus to their loka  for 16 days  every year so that they  can visit   the homes of their children in earth and happily eat the food given to them ,HE also felt he can clean the pithru loka     during that sixteen days,Because of this  the Pithrus consider these days as festival days.If their progeny do not feed them at least one day, they would go back to their places   hungry and  sad and may curse their children , that they   should never have  children ,
Normally we are expected to do  Sradham on all the sixteen days addressed not only to our Pithrus but the  Karunika pithrus*. If  by chance it is not possible , they should do it on then  they should do it  on the  thithi when their parents died,

If even that is not possible , you must at least do tharpanam to the pithrus    during those days. Tis tharpanam is also addressed   to normal Pithrus as well as Karuneeka Pithrus.
It is told that  if you do  thapanam  on the following  thithis  of Mahalaya  Paksha   , the following benefits    would be received:-
1.Prathama. Those of our Pithrus who have died  with unfulfilled   wishes would get satisfied    and such death  can be avoided to your progeny
2.Dwitheeya . Your Pithrus   who lead a suffering life due to being handicapped  or  deep depression  would become contended and would bless you.
3,Tritheeya. This tharpana is called “Pithru mangalya suthra  tharpana puja”   and would help those pithrus who married  against their wishes and suffered  in the world and died.
4.Chathurthi . THis  charpoorva tharpana  would help those who died  sad because they are parting from their pets  and adopted children.This will also help those who were not able to serve their mothers before their death.
5.Panchami .This is called  Vruksha  paripalana  tharpanam .If you do this , then the trees which your ancestors  grew and looked after  would  bless you.
6.Sashti. This day   will help those  of our ancestors who were teachers   and who might have punished  or ill treated them. This also is a thanks giving to our own teachers   who helped us get knowledge
7.Sapthami. This would help  those people who  did not help deserving people or did not give proper   compensation.
8.Ashtami  . This helps those pithrus who lead  a life without dharma. It would help them had they repented for their behaviour
9.Navami . This would help those   ancestors who might have met an accidental or unnatural death.
10.Dasami. It is called Bala  Sanjeeva  Tharpanam.. This hek lps those of our ancestors who might have died before they attained   the   age of five. It is also called  Karunya Tharpanam, as these ancestors would never receive   any tharpanam.
11,Ekadasi . This is called   the Pithru paripalana   tharpanam. THis is to compensate Pithrus for   many of their things which we are using  . They would become happy if we do it.
12.Dwadasi .. This is called  “Ksheera Amritha dosha  nivruthi tharpanam” . This would help those mothers who could not give their milk to their babies, and to the babies who died  without getting mother’s milk
13.Trayodasi  This is called Brahma sakata tharpanam..They normally pour the tharpana   water over a sandal wood piece.It would help us to remove Pretha   doshas
14.Chathurdasi . This would help pithrus whose  cremation was done outside his native place or to those  in whose  after death rituals , the eldest son did not participate
The Manthras Mahalaya  Paksha   Tharpanam  and   The sankapa manthras   with  possible alterations   world wide  for this year  is given  separately