Classification of Dhurbha grass and its use in rituals

Classification of  Dhurbha  grass  and its use  in rituals 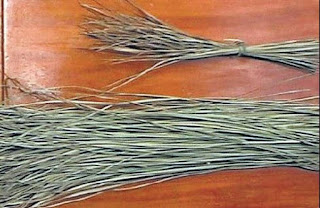 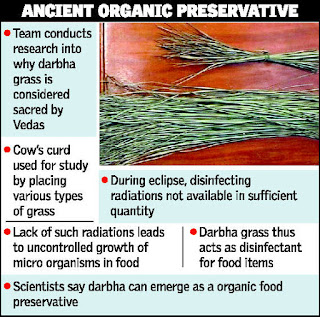 (Dhurbha (Desmotachya bipinnata) is a tropical grass considered a sacred material in Vedic scriptures and is said to purify the offerings during such rituals .Traditional tropical grass, Darbha, has been identified as an eco-friendly food preservative. Though  I have have been studying about different  Hindu rituals  , I was not aware  of the classification  of Dhurbha grass  and its suitability  for  various rituals. This was given in Tamil  by Sri Vasudevan  Srinivas. Thanks  to him.
As  a young lad , my elders informed  me that  Lord Brahma  used to arrange marriages  by two  Dhubha plants. I used to ask, which Dhurbha  is male   and which female  .After a long  time I have got the answer.)

For marriages  male Dhurbha  is used, for Pumsavana female  Dhurbha is used,
And for all other  rituals   the eunuch  dharbha   can be used.

Archana  , Japa  , homa , Dhana   and Pithru tharpana,
If done   without pavithram, then everything   would be destroyed

For rituals   involving Pretha(dead body)  only one dharbha is used,
And for all    daily     rituals     two  dharbhas with 4  tips are used

In case of rituals  of pithrus  three dharbhas  are used  and
For rituals involving   Devas  , four  dharbhas   are used,
In rituals  like yaga five are used and for doing parihara   six are used.
In case of meals   and all other rituals   seven have   to be used as knot.

For a two inches knot   five fist length  of Dharbha is needed
And its height   should   be   four  inches.