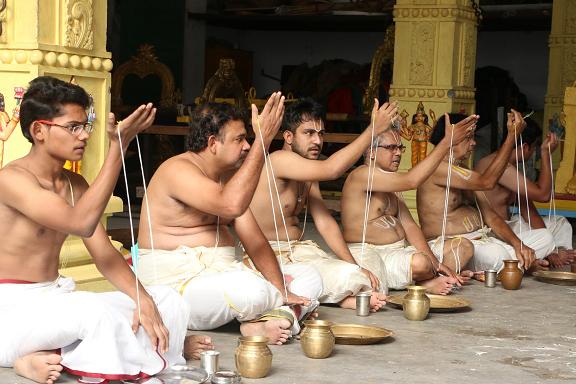 Most of the young  people  call the festival  of Upakarma  as “ festival of Change  of poonal(sacred thread) “ .THis festival is  called  by majority of the people as  “avani avittam (Avittam(Dhanishta)   star  occurring in the  of Avani(August –September called Chingam in Kerala)

Most of them feel  that   Avani avittam festival is celebrated by  chanting “Kamo Karsheth”   taking  idli and Chutney to break fast , Changing old sacred thread to new  and  something called  “Kanda Rishi Thrpanam “. They  feel that  all these  can easily be accomplished   before  8 AM in the morning  and they can go   to their school/college /office, They also know that  for some reason  they should not take   dinner that night .

Even most learned  Vadhyars  cooperate   with this  method  They start  the ritual in a temple  or hired hall  sometime around 6 AM. The first batch is called  office batch, the second one  very urgent batch, and so on. Before start  of the every  batch , the chief vadhyar will scare you by telling you that it is  the last urgent batch. This procedure would go on   till around 9 Am  .When males  return from  the function the males are supposed to be received  by the  ladies at home by a Harathi.

The real  name of Avani avittam   is Upa karma  and for all the Vedas  it does not come on the avittam of  Avani month  for example  Avani avittam is celebrated on Sravana(thiruonam)  day  for rig vedis  and Sama  Vedis  observe  it on  Hastha  Nakshtram.

Upa karma  consists of two parts . Upakarma( action Redemption) and Uthsarjana(giving up  doing deva karyams ). These help the already learnt Vedic chants shine with great vigour. .Any actions done with such strengthened Vedic chants , would give good and better results. Due to our using Vedic chants for various purposes as well as our not being in a position to follow all the rules, make such chanting of Vedas very weak. So it is necessary to do Upakarma and Uthsarjana every year.

Naturally   you would ask “When did  Vedas got weak  and why is it necessary  to strengthen it. Vedas    were created by our Supreme God   and was handed over to Brahma  , who taught it all Prajapathis and Devas   who strengthened   what they have  learnt by daily chanting it  Avani avittam is the day when the Supreme God   gave  the Vedas  to Lord Brahma .Vedas  get strengthened by being more and more accurate  , when people   who have learnt it chanted it , the way that  it  should be chanted.

Since most  of us have not learnt  to chant Vedas , we may ask “Why or how we are capable  of strengthening   the Vedas?”AS a Brahmin   we do chant several  Vedic manthras   during  our nithya  karmas like Sandhya Vandhanas   and Pithru Karmas done annually  etc .If we   do not do Upakarma  we   would be chanting   the weakened Vedic Manthras  only.So there is a need for each of us to do  Upakarma so that  the vedic Manthras  that  we use  are  powerful. You may  be interested to know that  sacred thread celemony(Upa nayanam)  alone does  not make us suitable   to start learning  Vedas .THis   suitability   comes only after   our  first upakarma(THalai avani avittam).

Since we   are  used to   do Upakarma in several  avasara  batches   starting   from 6 am,   WE would all be surprised  to know that  we should start doing it only after performing Madhyahnikam   at 12 noon, followed  by Brahma  Yajnam
.
Before   doing any important Vedic Karma   we  always  change our sacred thread(Poonl/Yagnopavitham) .AS Brahmins we are supposed to learn Vedas(Vedic Uthsarjana  ) daily  .Since we have  not been able to do it, we  do ceremony  of redemption and chant  “Kamo karsheth” THis manthra   also happens to be a manthra  of redemption to all  sins  we have committed.

Then we chant   the Maha sankalpa  which tells when we  are doing it and at what place   and requests God to   pardon the very small, small and big mistakes that  we have   committed   during   the previous year. After  chanting this manthra we are  supposed to take bath but what we do  nowadays is a sankalpa Snana(Can’t  we take bath. We definitely can ) We change   the sacred   thread again .Then we  do  Tharpanam(satify)  for kandarshi (the  sages  of a particular  Kanda(chapter)  of the Vedas,.We are  together  then supposed to do Upakarma  Homam   and after  that  we chant  the beginning  of  several  chapters of the Vedas .This  is followed by  Jayadhi  Homam.

I am sure when many  of you who do kamakarsheth  japa, Brahma Yajnam  , Maha Sakalpam   and Kanda Rishi tharpanam   and come back home   would be surprised   to know that  what   you do is a very  small portion of the Upakarma Uthsarjana  Prayoga  which we are  supposed to do
Both ourselves(for telling Vadhyar  that we need to complete Avani avitaam by 8 am)   and the Vadhyar ,who cuts short   the entire procedure (absolutely improper)  for sake of both of us . We    are committing a   grave mistake. Possibly next day  we have to do another Prayaschitha   for doing the ritual improperly. And may be that  is why    we are doing Gayatri japam next day.