Compiled from different sources by
P.R.Ramachander 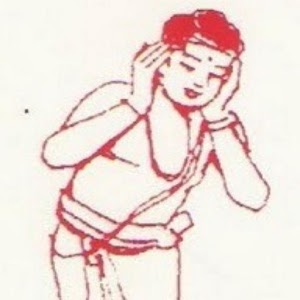 This is the  proper  method of a Brahmin Brahmachari  or householder   to introduce   himself  to elders , Our Gurus   and people  like saints  who are  fit to be revered.
The introduction  has  five distinct  parts. (It is very similar to our  introducing   ourselves   in an Interview  ,”I  , DR.Vaidhyanathan,  who studied  in madras  university under  eminent  professors like  DR.Krishnaswami, Dr. Suryanarayanan  and Dr. Ganapathy,  who is qualified   to practice  Allopathy , in which I specialise  in Orthopedix, introduce myself”)

Gothra   does mean , the place   where  Cows   are protected , Initially   there  were  the following  Gothras:-
Viswamithra , Jamadagns , BHaradwaja  , Gowthama  , Athri  , Vasishta  , Kasyapa   and Agasthya.

Please note that  there   are  many Gothras with  groups following   different  Pravara Rishis.

C, Our Veda
This is possibly   the Veda  which was studied   by  our patrilineal   ancestors .  Though   4 vedas are  listed  , , in South India  people   who follow   Atharva  Veda are   not to be found. But there are   two branches  of Yajur veda  called  Shukla  Yajurveda   and  Krishna  Yajurveda.

It is interesting to find among  North Indian Brahmins

In South India also    several  scholars have mastered  more than one Veda  but  they   always  term themselves  as belonging to one Veda  only.

Suthra  means “thread”   but  by Suthra  what we mean is   the Guidelines   for doing our rituals.
Each Veda has one or two Suthras . For example(I have compiled these   from various sources.  If you pint out  Omissions and Commissions, I woud be grateful    and correct them)

Al our rituals have to be peformed by Following the Sutra  of our clan,. If due to non availability  of scholar priest  trained in our Suthra , if we perform using rules  of other Suthra  , then we  are supposed to repeat using our Suthra  later.

E.Our name
We add the name   which was given to us   with the surname   Sharma (Which essentially means    we are Brahmins)  . If your name itself is Sharma  , You can say “sharmanamaham”