Pranayama – the control of breath

Pranayama – the control of breath- There  is an extremely urgent need  to  teach how to do   Pranayama during Sandhyavandana. 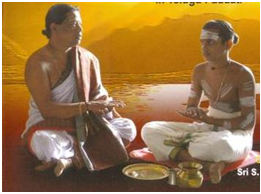 Pranayama is a  part of  daily rituals  of a Brahmin.Loosely   the priest tells  the Brahmin (Mookai pidiyungo”  meaning catch the nose. 90% of the people  hold all their fingers  in the form of a cone and touch the tip of his nose.(There is a joke.When an NRI   wastold like this by the Vadhyar , it seems he caught   the nose  of the Vadhyar). I am giving below  a  very broad method of Pranayama with Manthra along with its benefits .

The first two steps of  SAndhyavandana    as pointed out  are puranic  in origin.  The third step  “Pranayama-  control of breath”  is definitely vedic in origin   and consists  of Manthras in Vedic  Sanskrit,
A modern  international  study has shown that  Pranayama   as a yogic exercise   has the following   benefits to the human being :-
1.Pranayama techniques are beneficial in treating a range of stress related disorder.
2.Pranayama improves the autonomic functions.
3.It helps relieving the symptoms of asthma.
4.It reduces the signs of oxidative stress in the body.
5.Practicing pranayama everyday can assist in steady mind, strong will power and sound judgement.
6.Regular pranayama can extend life and enhance ones perception of life.
7.Number of studies show that pranayama causes change in the cardio respiratory system including lowering of blood pressure
The exercise basically consists  of   closing one nostril   and u inhaling   through  the other nostril, then closing   both nostrils  and hold the breath and later closing one nostril  and  exhaling   through the other.  To do the job properly   , lot of knowledge is needed as to how much time should   be spent on each of  these  three  activities  viz. inhaling , blocking  and exhaling . You would be seeing   very large number of modern  people   approaching several yogacharyas    to learn about the proper technique.I am sure most of you would be shocked to know   that this proper technique  is supposed to be taught to you on the Poonal day
The procedure  is loosely called  “Om Bhoo.” By the  priest who   teaches us this . This is the procedure  of  Pranayama:-
Pranayama  Procedure :-
Sit on the floor   assuming the lotus pose(Padmasana  preferable).Keep the left  arm on the left thigh  , showing the open left palm upwards  , with the left thumb touching  the  left forefinger
Hold both Nostrils with Thumb and the little and third finger of the hands and recite the following Manthra:-
Close right nostril with  thumb and inhale   slowly through  Left nostril (Pooraka) and chant without moving the lips (remember  the seven  divine worlds above earth , starting from earth)

Om Tat savithur varenyam Bargo devasya dhimahi dhiyo yona prachodayath (this is the  greatest  manthra of Vedas  called Gayathri manthra and it means  ““I meditate on that Savitha (the sun or the enlightenment within ourselves) which helps us in our thought process, that God which is within me and that power which engulfs all the seven worlds, viz., Bhooloka, bhuvarloka, suvarloka, maharloka, janaloka, thapaloka and satya loka.”
Close  Left nostril   with  Little and third finger   and leave Exhale    slowly and chant  (Rechaka)  without moving the lips

Om Apa
Jyothj rasa
Amrutham brahma
Bhoorbuvasuvarom (meaning  “ Om is water, it is the light, it is the earth which gives the food, it is the air which supports life, and it is the ether which is spread all around. It is also the holy seven worlds.”)

Then do the inner  cleaning

Touch the ears three times saying
Om, Om, Om (This is needed to v clean the  finger   which might have got dirty during Exhalation)
Manthra in Sanskrit:-
ॐ भूः । ॐ भुवः । ओग्ं सुवः । ॐ महः । ॐ जनः । ॐ तपः । ओग्ं स॒त्यम् ।
ॐ तथ्स॑वि॒तुर्वरे॓ण्यं॒ भर्गो॑ दे॒वस्य॑ धीमहि ।
धियो॒ यो नः॑ प्रचोदया॓त् ॥
ओमापो॒ ज्योती॒ रसो॒﻿‌உमृतं॒ ब्रह्म॒ भू-र्भुव॒-स्सुव॒रोम्
This is what  I have learnt  but  there are  several modifications  of when and time period  to inhale , block and exhale. I had said above that during   chanting it should be done.Some other authorities   say that first the entire manthra should be told and then   we have to do  the inhaling, blocking   and exhaling.There are others who say  that the manthras have to be recited   during Khumbaka  i.e holding of breath.Some authorities say that the  inhaling , blocking and exhaling   should be in the ratio of 1:4:2
A Brahmin doing twice SAndhya Vandana and Once Madhyaheeka has to do this Pranayama   36  times,  If done properly, it would clean his lungs, it would give him great peace of mind  and make him overall  healthy.
This   has to be taught   to every Brahmin by his Guru   and  this would make him healthy  and wise . The procedure may differ from Guru to Guru  Here is a   sample  video on how to do Pranayama   by A vaishnavite Brahmin  https://www.youtube.com/watch?v=01cNxgP0uso . But  the method may be different for other groups of Brahmins