Avani Avittam 24-9-2015(Thursday )
(Compiled by P.R.Ramachander)
(For the past 15 years , I have been putting the   for the rig Vedis, the same collection of Manthras   like Yajur vedis.  Being a Yajur vedi  , I have seen the rig Vedis also doing   the same rituals   as Yajur Vedis.  A  learned Gentleman from Madras  viz Sri Mani Narayan wrote to me   that  the manthras , I was giving was wrong and the correct manthras   are available  in a book by  Seri L.Anantha Narayana Sastri and published by  R.S.Vadhyar, Palakkad.  Lat year I got the book, To my surprise  I found all the rituals before Mahasankalpa    were Pujas and Homas, which cannot be performed    without the help of   the learned priest.   They are
1,Vighneswara Pooja
2.Sankalpa Punyahavachanam
3.Aghni Mukham
4.Veda Vyasa Pooja
5.Pradhana AAjyaa hoothaya
6,Pradhana  Charu homa
7.Uthsarjanarthe  Veda Aarambh
8.Home sesha

The Kanda Rishi Tharpanam of the Yajur Vedis is to be replaced by A very elaborate  Deva –Rishi –Tharpanam  , which is again  is followed by Gayathri Homa      and Veda Aramba,  Since I was trying     to give Manthras for people    who   cannot  get help of Vadhyars , I  am giving below, Yajnopavitha Dharana  Manthra,  Mahasankalpam and Deva Rishi Pithru Tharpanam , followed by Brahma  Yagna  and the Gayathri japa  manthras   for the 30-8-2015.)

Wear Poonal one by one by reciting(poonal should be held by both hands, the tie in the poonal being held above by the right hand facing upwards)

g.Remove the old poonals  and break them to pieces by reciting

h.Do aachamanam.
Summary meaning: I wear the white yagnopavitha that is purifying , which was born along with brahma, which is capable of increasing life .I am sure this would give glory and strength to me.I am destroying the dirty , soiled yasgnopavita .

Summary meaning:Here again apart from locating oneself with reference to time , one locates himself with reference to place also.We are supposed to live in Jambu Dweepa, Bharatha Kanda which is south of the great mountain Maha meru.Then again this Bhasratha Kanda is blessed with many holy rivers and holy places.Then prayer is done to God to pardon sins committed by word, thought and deed, because this was done inspite of his great grace which made us be born as human beings after several wheels of birth.Also the sins performed during several ages in life is highlighted.Some of the sins specifically mentioned are those done while earning money without conscience, giving money to improper people, actions which did not suit the caste we are born in, sins due to non performance of actions which ought to have been done and so on. We pray God and tell him that we would take bath in holy pure water and then start the veda parayanas which is our duty as Brahmin.

After bath again change poonal by reciting manthra as given in s.No.1.Please note that now a days very rarely people take bath after mahaa sankalpam but do prokshana snanam i.e bath by sprinkling of water on the head.

II. With Yagnopavita   on Left shoulder(Upveethi), one tharpanam through tip of the fingers

IIi. Deva tharpanam
With Yagnopavita   on Left shoulder(Upveethi), one tharpanam through tip of fingers

V.Aacharya tharpanam  (Yagnopasvitha on right shgoulder(Prachina vidhi)
Three tharpanam every  time  water to go in between thumb and the palm.

Vi. Pithru  tharpanam  (Yagnopasvitha on right shgoulder(Prachina vidhi)
Three tharpanam every  time  water to go in between thumb and the palm.

Though these are essential part of Avani avittam , I am not giving this because Vedic manthraas are very diffcult to transliterate in to English and reading them wrongly would be counter productive.

After this recite if possible vedic manthras that you know like Rudram, Chamakam etc

13, Do rishi tharpanam by wearing yagnopaveetha as garland and pouring out water from  the liitle finger

15.Put the yagnopaveetha in the normal fashion
Pour water saying That sat Brahmarpanamasthu
And then do aachamanam.
Brahma yagnam(sacrifice to Brahma) is the oblation offered to satisfy Devas, Rishis(sages) and Pithrus(ancestors). It is supposed to be performed daily after Madhyannikam, But nowadays it is done mainly on avani avittam days. 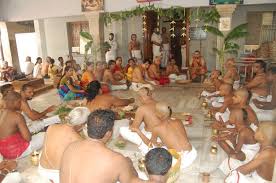